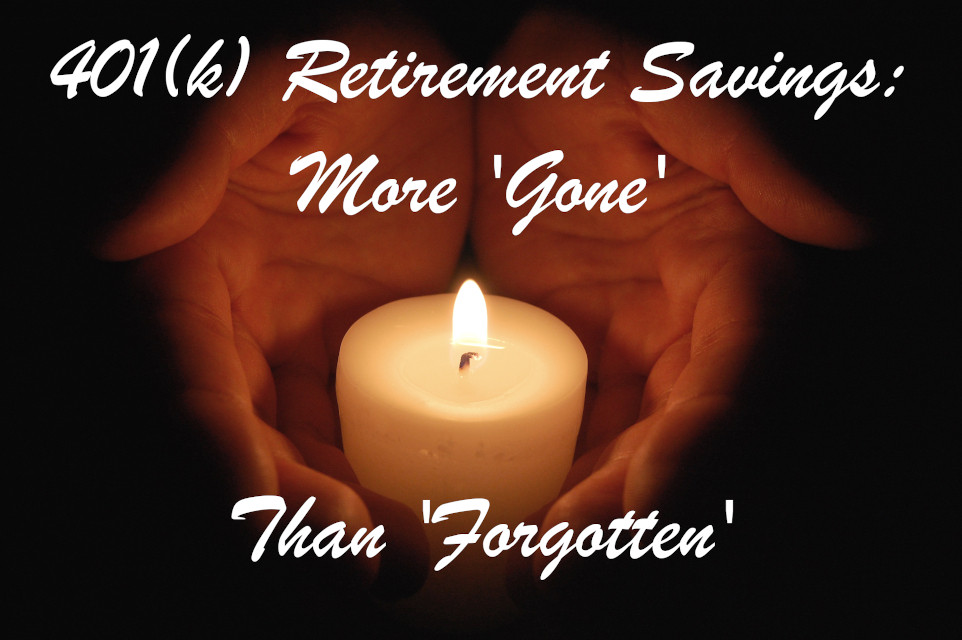 Draft SECURE 2.0 legislation that provides for a PBGC-based Retirement Savings Office of the Lost and Found, along with the May release of a drama-laden white paper, could leave casual observers with the mistaken impression there is a massive problem with “forgotten” 401(k) accounts.

Whatever apocalyptic term you might apply – forgotten, stranded, left behind, zombified or unresponsive – only obscures the reality that every one of these accounts remains in the 401(k) system, and a happy ending is still possible, even likely. The same cannot be said about 401(k) cashout leakage, a problem that truly dwarfs forgotten 401(k) accounts in terms of both its size and severity.

Finally, don’t forget that auto portability is a feature that nearly 9 in 10 401(k) participants want.

How Big Is the Forgotten 401(k) Account Problem?
Ultimately, it is impossible to know how many accounts are truly forgotten, because there is zero empirical data available on amnesiac 401(k) participants. This was not a barrier for the firm that released a white paper making the case for massive numbers of forgotten 401(k) accounts, which they pegged at 24.3 million accounts, representing $1.35 trillion in assets.

Risking Adams’ wrath by venturing my own back-of-the-envelope guesstimate, I would place the numbers of forgotten 401(k) accounts in the 2.3 million range, representing assets of around $35 billion. I get there by starting with the same 21.3 million “retired or separated” participants referenced in the white paper, applying EBRI’s average balance for job-changing participants of around $15,000, and further applying a key finding from a 2018 survey by Boston Research Technologies, indicating that 11% of terminated account records had a stale address.

More ‘Gone’ Than ‘Forgotten’
Whatever your preferred number is for forgotten 401(k) accounts, it is clear their incidence pales in comparison to the more severe, ongoing 401(k) cashout leakage problem.

According to the Savings Preservation Working Group, each year between 33% and 47%, or 4.5 to 6.4 million job-changing participants withdraw their retirement assets following a job change. The lost savings amounts to between $60 billion and $105 billion annually. Tragically, about two-thirds of cashouts are completely unnecessary, and not the result of a financial emergency, based on a 2015 Boston Research Technologies Mobile Workforce study.

When it comes to participant outcomes, comparing forgotten 401(k) accounts to 401(k) cashouts is hardly comparing “apples to apples.”

By surviving the post-separation cashout gauntlet, forgotten 401(k) accounts are still technically preserved for retirement, and provided they are found, a happy ending can still result. On the other hand, the millions of unfortunates who unnecessarily cash out every year have already inflicted irreparable damage to their prospects for a timely or comfortable retirement.

Compared against the hellscape represented by 401(k) cashouts, you could truly consider forgotten 401(k) accounts as the “lucky ones.”

EBRI estimates the present value of “full” auto portability (for all balances) at $2.0 trillion, and at $1.5 trillion for balances under $5,000 – benefits which accrue at zero cost to American taxpayers. Furthermore, when auto portability is combined with practically any other retirement savings public policy initiative (ex. – expanded access, auto IRAs, auto enrollment), EBRI analysis reveals that auto portability dramatically boosts their policy benefits.

Speaking of forgetting, let’s not forget the perspective of 401(k) participants. Consolidating participants’ 401(k) retirement accounts helps them avoid cashouts, saves them time & money, simplifies their retirement planning and eases their transition to retirement income. Perhaps that’s why, in EBRI’s 2021 Retirement Confidence Survey, participants overwhelmingly endorsed auto portability, with nearly 9 in 10 participants indicating that the feature would be valuable.