A Big Problem: Another Leakage Study Reaches the Same Conclusion

Arriving with little fanfare, a recent study prepared by the Staff of the Joint Committee on Taxation, a nonpartisan committee of the United States Congress, confirms the findings of earlier research on cashout leakage – namely, that cashout leakage is a big problem, is driven by job changing, and is exacerbated by "forced distributions and [a lack of] portability of plans.”

While not mentioning it, the study’s findings also make the case for auto portability, which stands alone as the only viable, effective and readily available solution that costs taxpayers absolutely nothing.

The study, Estimating Leakage from Retirement Savings Accounts (JCX-20-21), was released on April 26, 2021, and is available on the Joint Committee on Taxation’s website at www.jct.gov.

The study takes a unique approach towards the calculation of leakage yet arrives at conclusions that are consistent with other credible sources. Whereas other authoritative cashout leakage studies utilized empirical data from recordkeepers and calculated annual leakage flows as a percentage of job-changing participants, of their retirement assets, or both – the Joint Committee study was able to use its access and authority to examine 16 years’ worth of tax returns and associated informational forms for millions of individuals 50 years old or younger.

The study’s multi-year data set consisted of a random sample of five percent of all individuals in the United States 20 and older, from 2003 to 2018 and accesses data from Forms 1099-R, 5498 and 1040 to build its model of retirement savings behavior. To overcome the inherent limitations presented by raw tax data, Joint Committee staff developed algorithms and employed machine learning techniques which they claim allowed them to model the aggregate flows between retirement accounts and individuals.

What the Study Found

Utilizing tax data to derive net contributions and net distributions, the model proceeds to calculate a “leakage ratio” – and presents the leakage values in aggregate, by ages (20-50), and as a time sequence for individuals experiencing various life events, finding that: 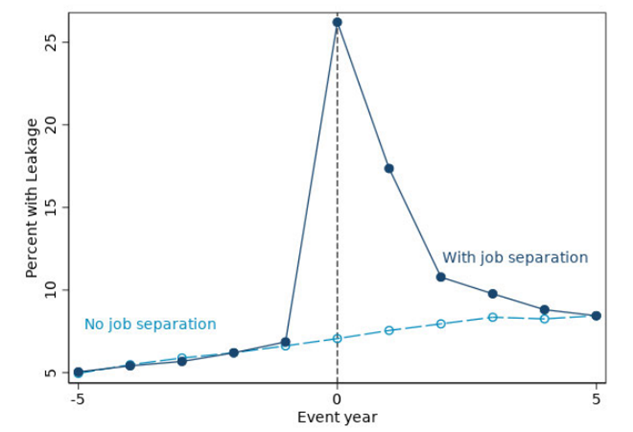 Given the dramatic correlation between a job separation and subsequent leakage, the study speculates on causation, stating that “the evidence emphasizing the role of job separations in leakage suggests that rules related to forced distributions and portability of plans likely affect leakage from retirement savings accounts.”

In other words, the prevalence of automatic cashouts under $1,000, combined with a lack of plan-to-plan portability results in much higher than necessary levels of cashout leakage.

Solving the Problem of Cashout Leakage Through Auto Portability

The Joint Committee’s study is important in that it emanates from a credible and nonpartisan federal source, and strongly confirms research from independent sources (ex. – EBRI) and large, private sector recordkeepers. There should no longer be any debate over the severity of the problem, or its underlying causes.

Had the Joint Committee’s study further speculated on solutions to the problem, I believe that they could have quickly identified auto portability as the most credible and viable solution that preserves small balances and moves them forward within the defined contribution system following job separations. Auto portability is supported by independent research and has the added benefit of being available now and costing taxpayers absolutely nothing. Given the very clear findings of the Joint Committee’s research, that’s something no other current or pending public policy solution can claim.