A Plan Metric Every Sponsor Should Track: Participant-Retained Retirement Savings

By Spencer Williams
President and CEO of Retirement Clearinghouse

When evaluating their defined contribution plans, plan sponsors understandably look at standard benchmarks such as rate of participation, average deferral percentage, and average account balance. However, given the highly mobile nature of today’s American workforce, sponsors should also consider tracking the average percentage of retirement savings that participants retain during their job tenure, and when they leave to join another employer.

The EBRI/ICI research strongly indicates that the best way for a worker to achieve a financially secure retirement is to participate in the U.S. retirement system as an employee of the same company for 40 years or more, and to let their retirement savings grow untouched until retirement. However, most American workers don’t stay with the same employer for their entire working career—EBRI estimates that the average American will change jobs more than seven times over the course of a 40-year career before retiring.

Despite greater workforce mobility, lifetime participation in the U.S. retirement system is still very much attainable for the majority of workers. Even though very few participants still stay with the same employer for four decades, they can obtain the same retirement outcomes as participants who do, if 1) they can consolidate 401(k) account savings in current-employer plans as they change jobs, and 2) avoid prematurely cashing out, leaving behind small accounts, and taking out loans or hardship withdrawals.

The key to achieving this success is for plan sponsors across the country to 1) adopt services that enable seamless plan-to-plan savings portability, and 2) encourage participants to preserve and move their retirement savings at the time of their job-change. Fortunately, sponsors can help their participants create “synthetic tenure,” to potentially replicate the savings outcomes of long-term tenure, by adopting a solution which has been live for nearly two years—auto portability.

Auto portability is the routine, standardized, and automated movement of a retirement plan participant’s 401(k) savings account from their former employer’s plan to an active account in their current employer’s plan. EBRI estimates that, were auto portability broadly adopted by sponsors, it would preserve up to $1.5 trillion, measured in today’s dollars, in the U.S. retirement system. The reason is that auto portability helps prevent participants from cashing out or stranding their 401(k) accounts at the point when they switch jobs, and therefore, they can retain more of their retirement savings as they go from employer to employer.

According to our research, a hypothetical male worker between ages 28 and 34 who switches jobs every 2.9 years (or a hypothetical female worker in the same age bracket, who changes employers every 2.7 years) would see their savings between ages 28 and 34 decrease to $13,300 at retirement without the option of asset portability. On the other hand, preserving, moving and consolidating their savings instead of cashing out or stranding their accounts would enable the same worker’s savings to grow to $75,900 at retirement. 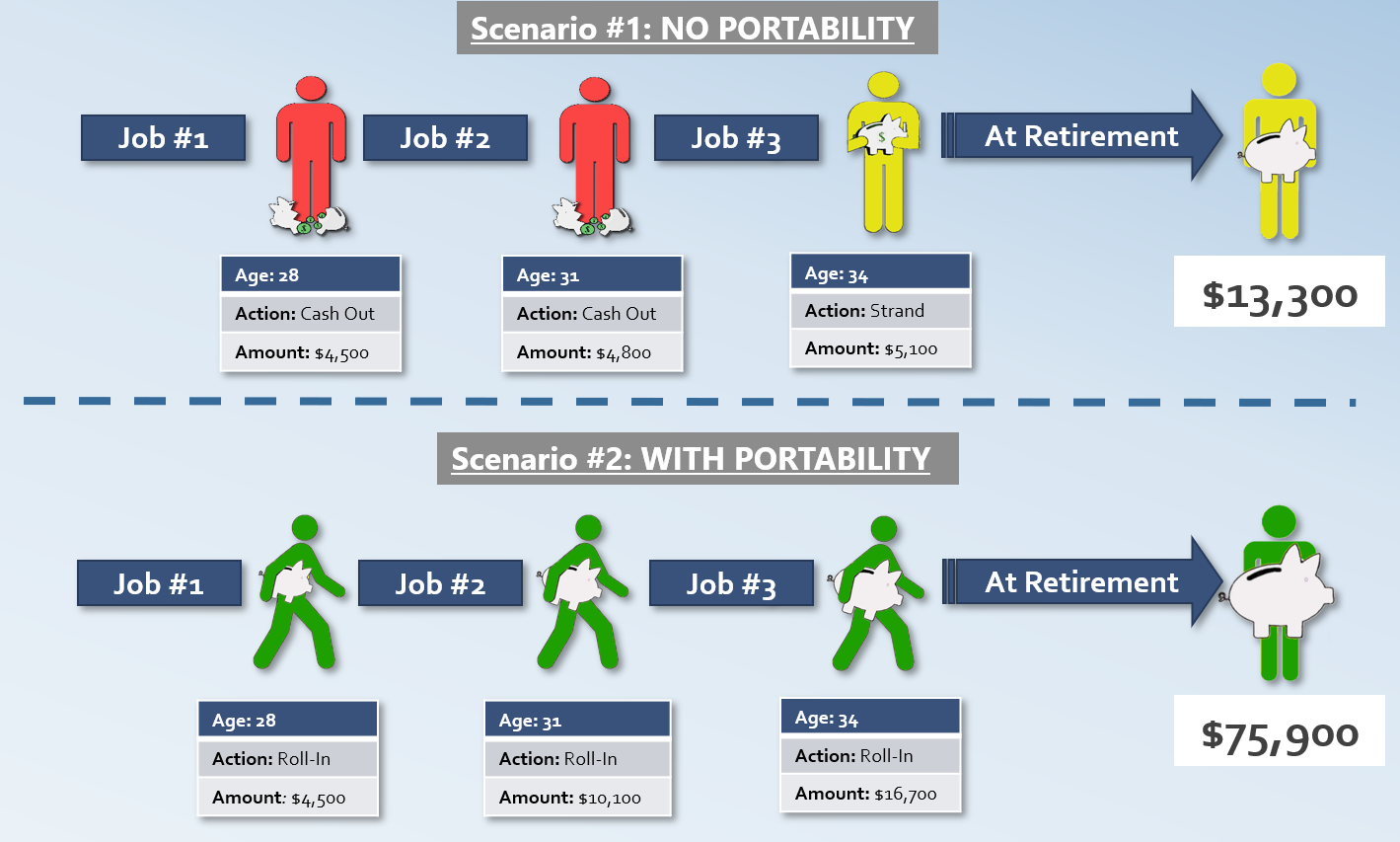 Auto portability can further increase the proportion of retirement savings retained by plan participants by eliminating the common practice of automatically cashing out stranded accounts with less than $1,000. The solution is underpinned by paired “locate” and “match” algorithms to track down and confirm the identities of lost/missing participants, including those with balances of less than $5,000, and then begin the process of rolling 401(k) account balances into active accounts in those participants’ current-employer plans.

In addition to making internal plan changes to increase their participants’ retained savings, plan sponsors can also strengthen this metric by considering participant outcomes above all else when evaluating automatic rollover (ARO) programs, which are a key driver of cash-out leakage. Providers of these programs—either a plan’s recordkeeper or a third-party vendor—handle the automatic rollovers of small accounts with $5,000 or less into safe-harbor IRAs. But too often, plan sponsors, or their consultants, only compare fees and default investment yields when conducting due diligence on these providers.

Instead, sponsors should assess an ARO provider’s safe-harbor IRA option by looking at cash-out rates, and the median length of time that terminated participants keep their rolled-over savings in safe-harbor IRAs. Good ARO providers track those metrics. That data, along with fees and investment returns, can be used to calculate the percentage of retirement assets retained for the average participant subject to an automatic rollover.

In addition, when evaluating ARO providers, plan sponsors should check to see that participants whose assets are rolled over have access to education and assistance for consolidating their savings in their current-employer plans, or an existing IRA the participant may already have in place. In other words, an ARO provider shouldn’t view safe-harbor IRA accountholders as long-term investors in their default funds, but as participants in the U.S. retirement system who should consolidate, and retain as much of their savings as possible.

As we near the half-year mark, sponsors can demonstrate their commitment to acting as fiduciaries by sitting down with their plan consultants and record-keepers to track the contributions made by participants, as well as how much of those contributions they keep through their tenure at the company, and after leaving. Putting plan participants’ retirement outcomes first is key to strengthening overall financial wellness among a sponsor’s employees.

As long as participants are able to quickly and easily move and consolidate their 401(k) savings upon changing jobs, and continue doing so for their entire working lives, then their savings remain intact and they can make uninterrupted plan contributions until they retire. Encouraging and enabling these participant behaviors is the next best thing to a worker staying with the same employer from the start of their working life until retirement.