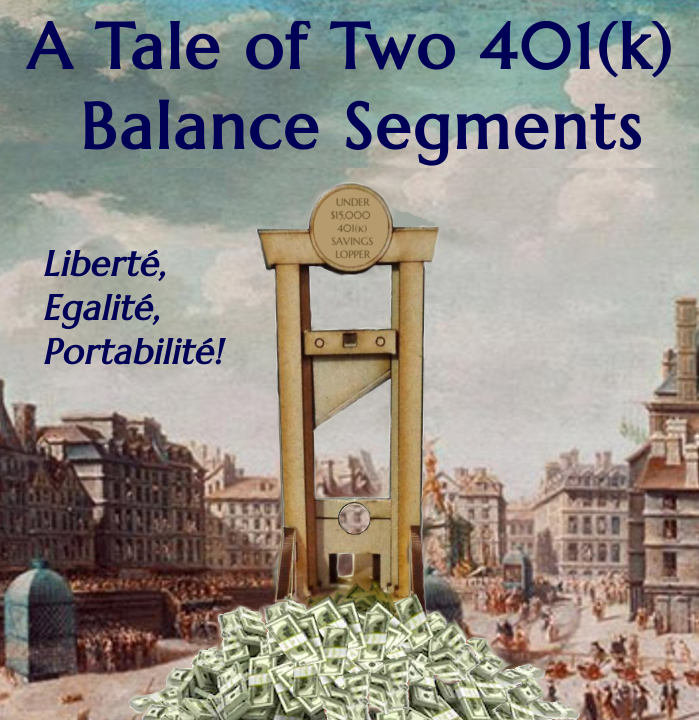 With apologies to Charles Dickens, it’s unfortunate that our “tale” is all-too-real.

New analysis, based on the Auto Portability Simulation, expands our perspective on 401(k) participant behaviors following a job change, demonstrating that participants with larger 401(k) balances will experience a range of post-separation outcomes that are far superior to their less-fortunate counterparts with smaller balances.

Fortunately, the disparity between 401(k) balance segments can be solved without a revolution. By extending the proven “automatic” plan feature strategy to include auto portability, small-balance retirement savings can be preserved, moving forward seamlessly when participants change jobs and enroll in a new employer’s plan.

Insights from the Auto Portability Simulation

In 2016, Retirement Clearinghouse (RCH), along with Dr. Ricki Ingalls of Texas State University, built the initial Auto Portability Simulation (APS) model. The APS was the first-of-its-kind in the retirement industry, using discrete event simulation software to model millions of decisions made by job-changing participants over a 40-year period. The APS has been periodically updated to model additional scenarios and to incorporate the best-available data on participant behaviors.

The APS model’s structure allows us to follow discrete segments of job-changers over time, observing and tallying the behaviors they undertake and the outcomes that they experience. It is this capability that reveals the dramatic differences between our two balance segments.

The APS predicts that, within eight years:

At 7.7 million participants, the population of sub-$15,000 balance job-changers is roughly equivalent in size, but that’s where the similarities end. Compared to the higher-balance segment, these participants will cash out at much higher levels, far fewer will voluntarily move their savings forward, and large numbers will be subject to mandatory distributions.

For this segment the APS predicts that, within eight years:

What Drives the Differences?

All 401(k) balance segments are impacted by cashouts at separation, as large recordkeeper studies have shown. Follow-on research by Boston Research Technologies in 2013 and 2015 revealed that up to two-thirds of cashouts are due to external factors, including systemic friction, and that only one-third of cashouts are driven by financial necessity.

In 2016, Northern Trust’s Sabrina Bailey and Gaobo Pong published The $10,000 Hurdle, a study that documented an empirical pattern of cashout behavior that noticeably dropped as 401(k) participants reached a $10,000+ balance level. Bailey and Pong theorized that crossing the $10,000 level triggers a stronger sense of accomplishment and “incentivizes commitment” – dampening the desire to cash out.

There is also the “hassle factor.” Put simply, cashing out is easy, whereas moving retirement savings forward is hard. The 2015 BRT survey of 5,000 former participants showed that half of the participants who cashed out indicated that they would not have done so if rolling their savings into their new plan was as easy as cashing out.

The large disparity in voluntary rollovers to IRAs suggests that participants with higher balances preferentially receive education, assistance or encouragement from third parties, whether from institutions or advisors.

Finally, a large percentage of our small-balance segment participants are subject to mandatory distributions. There are several pending legislative initiatives that would increase the mandatory distribution threshold from $5,000 to between $6,000 and $7,600, with annual increases tied to the rate of inflation.

It’s not healthy for our retirement system to have two classes of 401(k) savers. To fundamentally alter this dynamic requires the widespread adoption of the financial technology known as auto portability.

While the financial technology that drives auto portability is ready and in limited production, its widespread adoption awaits pending guidance from the Department of Labor, which will provide a safe harbor to plan sponsors allowing the automatic roll-in of small balance accounts that were previously forced-out into safe harbor IRAs, without the need to seek affirmative participant consent.

The positive changes brought about by auto portability should deliver a happy ending to our Tale of Two 401(k) Balance Segments with the refrain “Liberté, Egalité, Portabilitié!”