This latest EBRI analysis was particularly timely and relevant, since both ACPAs and a refundable saver’s credit are included in the 9/7/21 retirement-related budget reconciliation proposal by the House Ways & Means Committee.

Unsurprisingly, EBRI projects that these two high-profile retirement savings policy initiatives would deliver significant benefits – which VanDerhei characterized as having a “huge impact on reducing retirement deficits” – particularly for younger age groups. However, what was surprising was the sheer magnitude of incremental benefits delivered by the addition of auto portability to those initiatives, significantly paring retirement shortfalls for 35–39-year-olds, across all race and ethnicity categories.

About the Analysis
In addition to modelling the impact of ACPAs and a modified saver’s credit, EBRI’s analysis also examined these initiatives in combination with other policies not presently on the legislative docket, including:

Interpreting the Results
EBRI’s summary findings indicated that ACPAs, when paired with an enhanced saver’s credit or “match” would drive huge reductions in retirement shortfalls for 35–39-year-olds, ranging from 17 to 26 percent, depending on race. VanDerhei further noted that those policies would have an even broader impact, when households who are not simulated to have a retirement deficit are considered.

Turning to the addition of other policies, VanDerhei remarked that either of the employer student loan contributions or a “skinny 401(k)” could add “another 4 percent reduction in retirement deficits.”

These findings were illustrated later in the webinar by the EBRI diagram shown below. 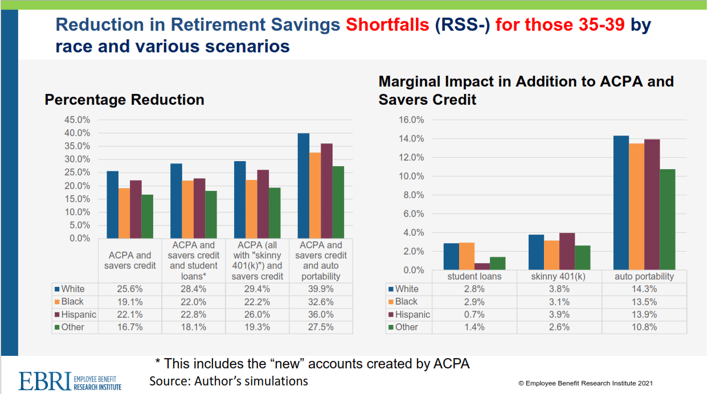 Connecting the Public Policy Dots
In a prior article (Beware of Unintended Effects of Retirement Savings Public Policies), I wrote of the need to consider the unintended, or second-order consequences of retirement savings public policies. I expressed my belief that the dramatic expansion of workplace retirement savings plans, while delivering significant benefits, could also result in increased cashout leakage as well as an increased incidence of missing participants and forgotten accounts. In that piece, I also suggested that auto portability could serve as a complementary policy initiative that would mitigate those effects, and in so doing, deliver incremental benefits.

EBRI’s analysis now seems to confirm that view. In fact, it seems that no other policy option even comes close.