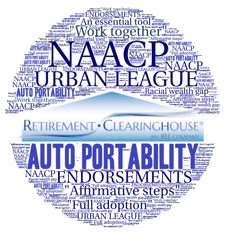 Robert L. Johnson, Founder and Chairman of The RLJ Companies and majority owner of Retirement Clearinghouse (RCH), has secured endorsements for auto portability from two premier civil rights organizations – the National Urban League, and the National Association for the Advancement of Colored People (NAACP) – both with over a century of experience advocating for solutions that address the inequities and economic challenges experienced by Black Americans and by other communities of color.

The endorsements from the Urban League and the NAACP dramatically expand a coalition that has formed in support of auto portability, including large defined contribution recordkeepers, large employers, legislators, regulators, and trade organizations.

Morial closed his endorsement by stating: “Now is the time for all of us to work together to reduce the wealth gap and make retirement more secure for Black families. The National Urban League stands behind all efforts to empower Black Americans and we are pleased to be aligned with you on the issue of Auto Portability.”

The NAACP’s Endorsement
Derrick Johnson, President and CEO of the NAACP, opened his endorsement by emphasizing the NAACP’s “support of your efforts to advocate for the full adoption of Auto Portability across national retirement programs. The implementation of Auto Portability is a necessary and transformational tool in addressing the racial wealth gap. It will ensure that Black families, and other communities of color, have the financial infrastructure necessary to maintain economic stability for retirement.”

Johnson then framed the NAACP’s support of auto portability in the context of “holistic economic inclusion” – where Black Americans must overcome retirement savings shortfalls that begin “during a worker’s earning years.” Citing statistics revealing significantly lower access by Blacks to employer-sponsored retirement plans (particularly in the private sector), lower retirement savings balances and higher cash out rates, Johnson pivoted to the importance of auto-enrollment as a “necessary strategy to address racialized inequities within retirement plans” – a strategy which Johnson believes will be augmented with the adoption of auto portability.

In conclusion, Johnson noted that “the NAACP is committed to being a partner in advancing the implementation of Auto-Portability as an essential tool to address racialized economic inequities.”

A Growing Coalition of Support for Auto Portability
The endorsements from the Urban League and the NAACP are vitally important in advancing the adoption of auto portability, as these organizations are forceful and effective advocates for the needs of Black Americans and minorities, who have consistently been under-represented and under-served by workplace retirement savings plans.

This growing momentum for auto portability was clear during the last four months of 2021, when:

We are grateful for the endorsements offered by the Urban League and the NAACP, and believe that their position is correct, is socially responsible and will be further embraced by the private sector and receive the continued support of public policymakers.