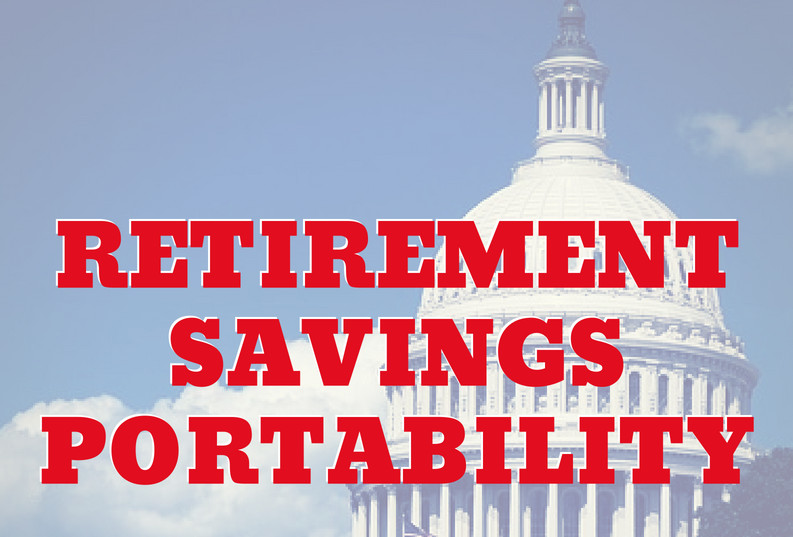 During testimony in a July 28th hearing held by the Senate Finance Committee (Building on Bipartisan Retirement Legislation: How Can Congress Help?), Aliya Robinson, Senior Vice President of Retirement and Compensation Policy for the ERISA Advisory Committee (ERIC), twice voiced her support for auto portability, the new plan feature that automatically moves small balances to the new employer’s plan when participants change jobs.

As noteworthy as Robinson’s testimony is that the organization she represents serves the needs of large plan sponsors. Large plan sponsor support for auto portability, coming on the heels of EBRI’s 21st Annual Retirement Confidence Survey, where nearly 9 of 10 plan participants indicated their preference for the feature, bodes extremely well for auto portability’s widespread adoption, as well as the enactment of public policies that further enhance it.

Important Testimony
While auto portability was by no means the exclusive focus of the Senate hearing, the persistent problems of cashout leakage, missing participants and “forgotten” accounts were topics receiving repeated, intense interest from Committee members and auto portability – along with a lost & found registry – were the policy initiatives that witnesses offered as viable solutions.

Addressing the phenomenon of job changing, Ranking Member Sen. Mike Crapo (R-ID) acknowledged in his written statement that “[p]eople are working longer, workers are changing jobs more often and the number of ‘gig workers’ is on the rise. Our retirement system must adapt with this changing landscape so every worker has a chance to save for a secure retirement.”

David Certner, Legislative Counsel and Policy Director, AARP, also noted in his written statement that “Congress should also discourage pre-retirement cash-outs of retirement funds and instead encourage account portability” adding that “[t]oo many workers cash out their savings when they change jobs.”

However, it was Committee Chairman Sen. Ron Wyden (D-OR) who struck at the heart of the matter when he solicited a comment on “portability” from Robinson, noting that workers take “a devastating financial hit when they cash out their retirement too early” and citing EBRI’s annual cashout leakage figure of $92 billion. Addressing portability, Robinson replied: “We absolutely agree. Anything that helps participants keep track of their retirement accounts, keep them in the qualified plan system, we absolutely support. In addition to the leakage problem you mentioned, we also think it will help with the missing participant problem where participants have a small account balance or have a short amount of time with an employer and the employer loses track of that participant. If there’s auto portability, then they’re able to keep track of their accounts and we think this will be helpful in a number of different areas.”

Auto portability came up once more during questioning by Sen. Chuck Grassley (R-IA), who asked Robinson to “comment on ways we can make sure workers aren’t leaving retirement savings behind when they change jobs.” In her response, Robinson again cited auto portability as a way “to make sure that as participants leave one job they are automatically tracking that account with them to their next job.”

The Bipartisan Retirement Landscape
For many, bipartisanship on retirement policy has been a redeeming aspect of our legislative process, and the 7/28 Senate Finance Committee was no exception.

It’s remarkable how far policymakers have come in just a few short years by clearly recognizing some of the issues in our retirement system, which arise from frequent job-changing and a lack of portability and reaching the cusp of enacting effective policy responses to address these issues. Should that happen, we’ll have policy advocates such as Aliya Robinson of ERIC to thank.

Finally, it’s refreshing to see that plan sponsors, participants and politicians on both sides of the aisle are united around the foundational principle that portability can help preserve retirement savings for all Americans.