On Filling the Leaky 401(k) Bucket

In general, legislation that gets more Americans saving for retirement is good. But if a great many of those incremental savers would likely cash out their savings immediately following a job change, then the public policy benefits might fall a bit short, no?

This is the principal issue I have with the House version of SECURE 2.0, which brings us to an inflection point in terms of helping under-represented and under-saved Americans. The provisions of the legislation that expand access and participation (e.g., – mandating auto enrollment) are targeted at women, minorities, and lower-income workers. That’s good.

However, if empirical data shows that large numbers of these targeted demographic groups will simply cash out – paying taxes and a 10% penalty to boot – have we helped them all we can? Perhaps we could improve our public policy outcomes by acknowledging that expanded access measures by themselves are akin to trying to fill a leaky bucket and by dealing with the leaks this time around.

The Leaky 401(k) Bucket
The “leaky bucket” analogy is a fitting way to describe our current 401(k) system.

Numerous 401(k) cashout leakage studies substantiate that cashout leakage is a big problem. Most recently, a March 2022 study released by Morningstar’s new Center for Retirement & Policy Studies (Retirement Plan Landscape Report), noted the “fragility” of a defined contribution system that “relies on new contributions and strong returns to mask outflows of more than $400 billion a year since 2015.” Utilizing the DOL’s Form 5500 datasets, the study contrasted the paltry level of plan roll-in contributions against massive net outflows, where the authors estimated that 55% may have cashed out.

More relevant to pending legislation is who’s cashing out and why. Put simply, it’s the same demographic segments that expanded access initiatives are targeting – women, minorities, lower-income workers, and younger age groups – all of whom are associated with much higher levels of cashout leakage.

And while about one-third of their cashouts are driven by a true financial emergency, two-thirds are due to a combination of poor decision-making and systemic friction, making cashing out a small balance the easiest and most tempting option following a job change.

Implications for Public Policies That Dramatically Expand Access
If the demographic segments targeted for expanded access and those most affected by cashout leakage are one and the same, then it follows that public policies should build in safeguards to minimize cashout leakage. The most effective safeguard, by far, is auto portability, which independent research has shown time and again will dramatically reduce cashout leakage. 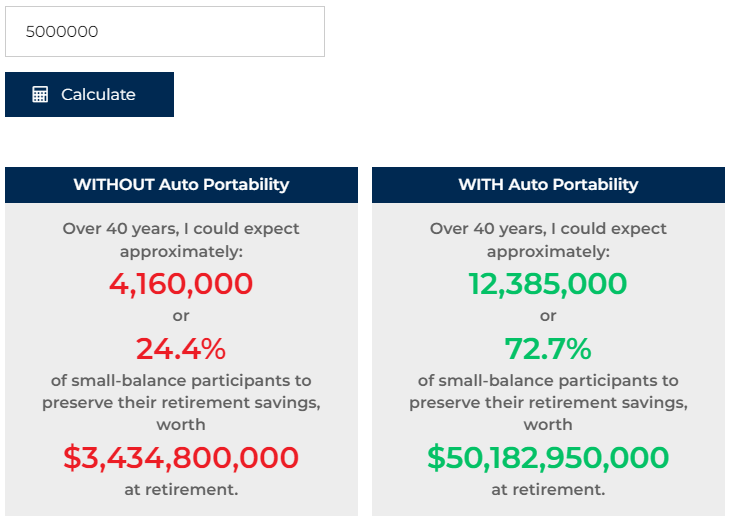 In short, adding auto portability to the hypothetical expanded access policy initiative would increase small-balance retirement savings by almost $47 billion, and that’s only for those job-changing savers with balances less than $5,000, and only for those added at the margin.

Auto portability’s adoption is already underway, but lawmakers could spur more rapid adoption by codifying into law the guidance issued by the Department of Labor and by creating modest tax incentives to encourage more early adoption of the feature.

The good news is that a recent hearing conducted by the U.S. Senate Committee on Health, Education, Labor & Pensions (HELP), where two of the four witnesses testified in support of auto portability, indicates a clear awareness of this reality, and suggests that lawmakers could take steps not only to expand access as contemplated in the House version of SECURE 2.0, but to finally plug leakage for small-balance retirement savers, once and for all.